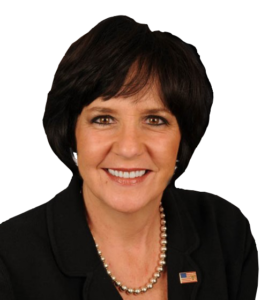 Gale Mastrofrancesco is a Republican and was elected to the Connecticut General Assembly in November 2018 to represent Connecticut’s 80th House Assembly District of Wolcott and a part of Southington. She is the Ranking Member of the Government Administration and Elections committee and serves on the Finance Committee and Human Services Committee. She is also a member of the CT General Assembly Conservative Caucus. As State Representative her priorities have been dedicated to the the principles of limited government, economic freedom, fiscal responsibility, individual liberty, and defending the constitutional principles this country was built upon. Gale is committed to the people of Wolcott and Southington and considers it her responsibility to make sure the 80th District has their voices heard in Hartford through her debates and votes on the floor of the State House and has received a 100% voting record. She also received a perfect score from CBIA (Connecticut Business and Industry Assoc) voting against every anti-business policy that came before her in the House of Representatives.

Gale formed her ideas of civic responsibility early on watching her mother, Marie, who served on the Waterbury Board of Education for sixteen years. She credits her mother with being the reason she decided to seek office, saying that her mother’s long history and dedication to public service was her inspiration. In 2009 Gale was elected to the Wolcott Town Council and served for 10 years until being elected to the State House of Representatives. During her tenure on the Wolcott Town Council, she held the role of Vice-Chairwoman for 8 years, chaired the towns negotiations committee and served on the finance committee. Her experience with the Town Council has given her the insights and experience to tackle the hard issues with determination.

Gale is the daughter of the late Charles and Marie Lanza and was raised in Waterbury, Connecticut along with her 5 brothers and sisters. Gale’s parents raised their family with traditional, values; instilling in their children the importance of working hard, living with integrity and to do everything with unwavering determination. She maintains that those values have served her well over the years, saying “Without values, we have no purpose. Values give our lives meaning.”

She has been married to her husband Angelo Mastrofrancesco for 38 years and in 1996 they moved to Wolcott to raise their two children. She was employed by AT&T Advertising for 18 years and held the positions of sales representative, sales trainer, and as a sales manager. She also worked for Benchmark Senior Living at The Village at Kensington Place in Meriden for 2 years as Director of Community Relations. Aside from her role as State Representative Gale is owner and editor of the Wolcott Community News, a local community newspaper she purchased in 2019 which publishes once a month.